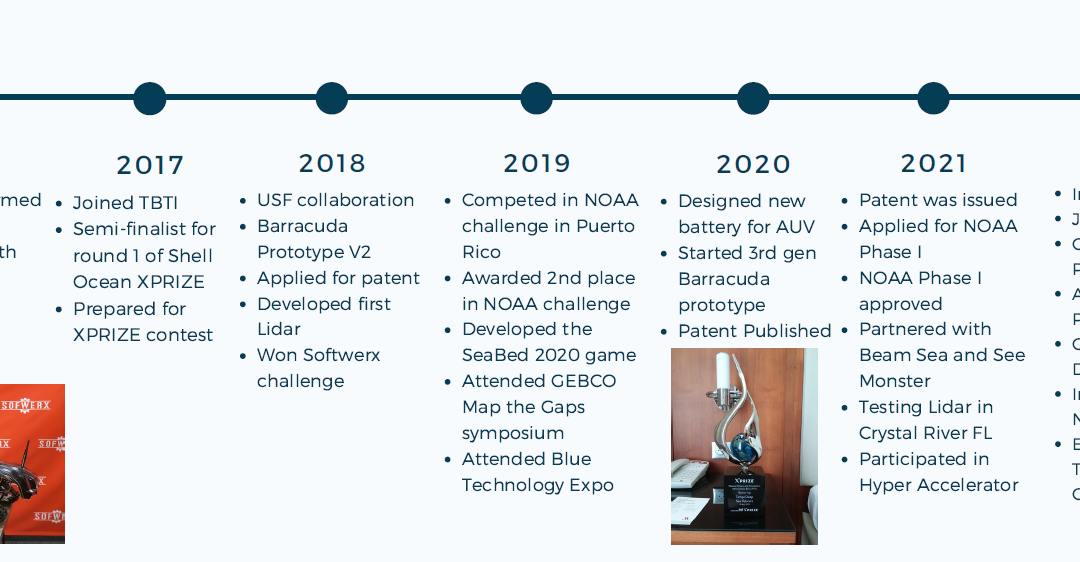 Building on previous years, Tampa Deep Sea Xplorers hit a series of important milestones during 2022, which has created a solid foundation for planned expansion and ramping up of product deliveries of our game-changing Barracuda AUV™ in 2023.

Just some of the key 2022 achievements include:

On the SBIR front. We were granted a phase 1 SBIR with NOAA and completed that in March. We then applied for a phase 2 and that was granted and we are 2 months into that one. Our compact underwater Lidar development for that is looking very good. We expect that will become one of our major products. We also collaborated with another company on a phase 1 SBIR for DHS. That was for a non-lethal crowd control barrier. We completed phase 1 and have submitted an application for phase 2, but we won’t know that outcome until early 2023. We are also collaborating on a phase 1 STTR with another company and the University of South Florida for collaborative swarms of underwater drones. We are not the principal in that grant but are furnishing the vehicles and providing technical assistance. We plan to submit a phase 1 SBIR to National Science Foundation soon and others TBD.

We attended the Inspire22 show that Braid Theory sponsored in May. We also attended the Embedded Technology show in Las Vegas in June. We made several good contacts there and are now working on an advanced battery design with a couple of companies that we met there. We will be attended the Orlando Maker Faire. I will also be attending the Blue Tech Expo in San Diego Nov. 15-18. We are being featured at this show as one of the NOAA SBIR companies. NOAA wants to show off a few of the successful SBIR companies as a public outreach thing. We are also being featured in the NOAA newsletter twice this month, one for the SBIR and one for being a veteran run business.

We are planning to attend a couple of ocean related trade shows in early 2023.

We are now getting ready for a crowd funding campaign with Start Engine. Which we hope will be successful in raising 1 million dollars to allow us to expand and do even more cool stuff.